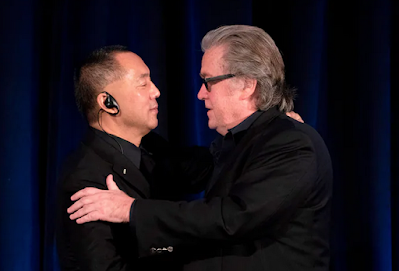 The report, provided in advance to The Washington Post, details a network that Graphika says amplifies the views of Guo, a Chinese real estate developer whose association with former Trump White House adviser Stephen K. Bannon became a focus of news coverage last year after Bannon was arrested aboard Guo’s yacht on federal fraud charges.  [snip]

Graphika’s research sheds more light on Guo, a onetime billionaire real estate developer who, in addition to his relationship with Bannon, has drawn attention for the confusing mix of disinformation and invective he has broadcast since moving to the United States, including contradictory attacks on both the Chinese Communist Party and anti-CCP dissidents in the West.  [snip]

Information disseminated by the entities that Graphika defined as the network focuses primarily on attacking China’s political leadership, but the network also has played a loud, persistent and largely overlooked role in U.S. politics, including in fueling falsehoods — repeatedly rejected by investigators and courts — that widespread fraud marred the 2020 election.  [snip]

After the election, content across the network embraced President Donald Trump’s false election-fraud claims and the related #StoptheSteal hashtag, and promoted Trump’s plans for a Jan. 6 rally in Washington, Graphika found. During the rally and subsequent storming of the U.S. Capitol, GTV featured live streams of the action, which Guo supporters promoted on social media, along with material calling members of the mob “patriots.”

Later, GNews and other wings of the network pushed false conspiracies that the violence was the work of antifa, Graphika found.

There's more at the link on Guo's operation.

We'd be willing to bet that some additional digging would turn up connections to Falun Gong, the pseudo- religious cult that's also involved in promoting right- wing politicians and causes here and around the world through such media as The Epoch Times.  It might be worth the Federal government's time to explore Guo's operation more fully and see if his destabilizing actions merit, at the very least, deportation.