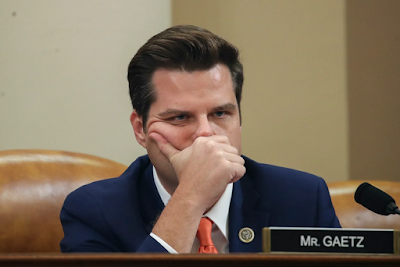 When Rep. Matt Gaetz attended a 2019 GOP fundraiser in Orlando, his date that night was someone he knew well: a paid escort and amateur Instagram model who led a cocaine-fueled party after the event, according to two witnesses.

The Florida congressman’s one-time wingman, Joel Greenberg, will identify that escort to investigators as one of more than 15 young women Gaetz paid for sex, according to a source familiar with the investigation.

But what distinguishes this woman, Megan Zalonka, is that she turned her relationship with Greenberg into a taxpayer-funded no-show job that earned her an estimated $7,000 to $17,500, according to three sources and corresponding government records obtained by The Daily Beast.  [snip]

On Oct. 26, 2019, Gaetz attended the “Trump Defender Gala” fundraiser as the featured speaker at the Westgate Lake Resort in Orlando. Two witnesses present recalled friends reconvening at Gaetz’s hotel room for an after-party, where Zalonka prepared lines of cocaine on the bathroom counter. One of those witnesses distinctly remembers Zalonka pulling the drugs out of her makeup bag, rolling a bill of cash, and joining Gaetz in snorting the cocaine.  [snip]

About that "no show" job:

Zalonka’s interactions with Greenberg’s circle extended to Gaetz as well. In mid-2018, Zalonka became a spokesperson for the American Medical Marijuana Physicians Association (AMMPA), a cannabis legalization group with close ties to Gaetz. The congressman was feted as a guest of honor at two of its conferences in 2018, and attended the previous year’s annual conference in October. The 2017 conference, which Greenberg also attended, featured Republican operative and Trump loyalist Roger Stone, who appeared at a Gaetz fundraiser after the congressman’s keynote speech. That day, Oct. 5, Greenberg used Venmo to send Zalonka $500 around midday—for “Rent.”  [snip]

Investigators with the Justice Department’s Public Integrity division are now examining Gaetz’s interactions with young women and cannabis industry contacts, CNN reported, as part of a probe into whether Gaetz was provided with sex from escorts in exchange for political favors. The sprawling criminal inquiry that originated with Greenberg has since morphed into an investigation into Gaetz’s role in an alleged prostitution ring that includes potential sex crimes with a 17-year-old girl.

Gaetz has the entitled arrogance of someone who's always been rescued from his mistakes and never had to really work for a living (thanks to his wealthy, connected daddy), and yet did very well considering his "limitations."  As such, he didn't seem to be very concerned about his actions or covering possible illegal activities, figuring he would always find a way out of his problems.  That arrogance, combined with the cooperation of Gaetz wingman Greenberg and corroborating testimony expected from eyewitnesses, may be more than enough to see that this particular sleazebag spends a long, long time in the slammer.  Fingers crossed.