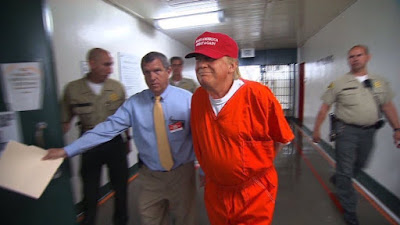 Yesterday's statement by the New York Attorney General's office that the Trump Organization is involved in a criminal investigation of the corrupt Trump Organization adds more weight to the growing legal burden of the "former guy."  Known in New York City and environs for years as a con man, serially bankrupt grifter and malignant narcissist Donald "Loser" Trump now has the full weight of the State of New York's legal apparatus focusing on possible felonies like bank, insurance and wire fraud that he and his organization committed. From CNN's report:

"The attorney general office's investigation into the Trump Organization, which has been underway since 2019, will also continue as a civil probe, but the office recently informed Trump Organization officials of the criminal component.

In an increasingly serious sign for former President Donald Trump, the attorney general's office is working with the Manhattan district attorney's office, whose wide-sweeping probe into the Trump Organization has looked into whether the company misled lenders and insurance companies about the value of properties and whether it paid the appropriate taxes. James' notification to the organization brings a new level of potential legal risk to the former President, with the attorney general now able to seek criminal penalties as part of the probe." (our emphasis)

Last August, Deutsche Bank, one of Trump's main lenders over the past 20 years, turned over his banking records to the office of the Manhattan DA, which has been working with the New York Attorney General's office in a coordinated investigation.  Those records will provide insight into whether he not only committed bank fraud, but whether his organization was used to launder money, as Deutsche Bank has been involved in.  The Manhattan DA also has Trump's personal tax records and has been subpoenaing and interviewing key witnesses who would have knowledge of their contents.

The story about asking the Georgia SoS to find votes has been retracted for months. There's an audio tape of the call leading to retractions from all the major newspapers who just made up lies because Orange Man. Such as: "Washington Post Now Says Trump Never Told Georgia Official to ‘Find the Fraud’."

But keep holding out hope that - after FOUR solid years of investigation - THIS will be the one that takes down Trump. An accounting dispute.

Eric, Gullible Cultist -- The Fulton Co., GA District Attorney has had an open investigation into Trump's call since early Feb. Your Dear Leader was recorded asking the GA Secretary of State to find votes for him to overturn the election in GA. Even the conservative Washington Examiner reported in late April that Georgia Secretary of State is cooperating with Fulton County's investigation -- try using Google next time. That "all the major newspapers" lied about the story is nonsense.

When your Dear Leader called the GA SoS he wasn't looking for voter fraud in GA, he was committing it. He's a career con man who has at least 29 criminal and civil cases against him (Google it). And if you think the NY State AG and Manhattan DA aren't on to something more than an "accounting dispute," you'll have your bubble burst.

Kudos for dealing with his odd framing of Trump's significant legal peril and with his bizarre view that the substance of Trump's call to Raffensberger has been debunked (it's ON TAPE, Eric the Gullible!).