QOTD: "These Are People With Brain Damage" 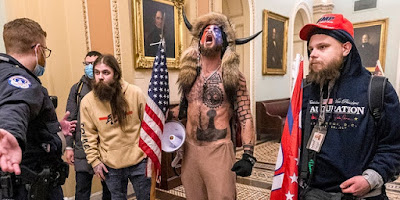 From TPM's story today about the "Trump Defense" ploy that some January 6 seditionists are trying out in court, presumably to lessen their sentences, Albert Watkins, the attorney for "QAnon Shaman" (Jacob Chansley / Jake Angeli) had this to say to TPM's Matt Shuham:

“A lot of these defendants — and I’m going to use this colloquial term, perhaps disrespectfully — but they’re all fucking short-bus people. These are people with brain damage, they’re fucking retarded, they’re on the goddamn spectrum.

But they’re our brothers, our sisters, our neighbors, our coworkers — they’re part of our country. These aren’t bad people, they don’t have prior criminal history. Fuck, they were subjected to four-plus years of goddamn propaganda the likes of which the world has not seen since fucking Hitler.”  (our emphasis)

In truth, a number of them had prior arrests and a criminal history, and the country "they're part of" is alien to the America that sane people live in and recognize. They willfully broke the law and tried to violently overturn the 2020 Presidential election on behalf of their Dear Leader, assaulting police and destroying Federal property. The overwhelming majority knew exactly what they were doing, why and for whom. No reduced sentences.

Labels: quote of the day, some January 6 rioters' sentencing ploy is to say Trump misled them