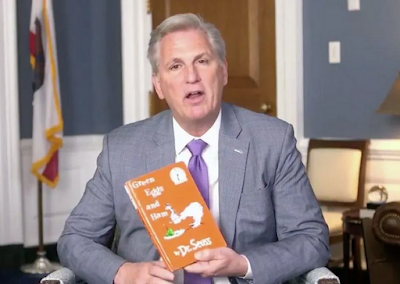 House Republican Minority LINO Kevin McCarthy (R- Coward) is coming in for his fair share of branding for the historical record today.   We won't even stray beyond the pages of this morning's Washington Post for what will someday be the political epitaph for this perfect emblem of his rotted out party:

IN A stunning, if not surprising, act of cowardice, House Minority Leader Kevin McCarthy (R-Calif.) on Sunday officially endorsed Rep. Elise Stefanik (R-N.Y.) to replace Rep. Liz Cheney (R-Wyo.) as chair of the House GOP caucus, the No. 3 Republican in the chamber. Ms. Cheney is on the verge of losing her post, perhaps as early as this week, because she unapologetically rejects former president Donald Trump’s lies about the 2020 election. [snip]

Ms. Cheney’s downfall, Ms. Stefanik’s rise and Mr. McCarthy’s complicity suggest that Republicans are, indeed, unifying — around the “big lie” and the sabotage of democracy.

House Minority Leader Kevin McCarthy (R-Calif.) understands how Trump’s lies about the election led directly to the Capitol insurrection; he told us so himself on Jan. 6. But now he is ready to boot Cheney out of her high-ranking post for simply telling the truth and to replace her with Rep. Elise Stefanik (R-N.Y.). Relative to Cheney, Stefanik is a moderate on policy. That no longer matters. Her core qualification is a willingness to go along with the “voter fraud” lie, and presumably with other lies as well, in the name of her own ambition. Shame on her. Shame on all of them.

A few days before the Jan. 6 insurrection at the Capitol, the House Republican leader had a conference call with GOP lawmakers. On the call, Rep. Adam Kinzinger of Illinois warned McCarthy that his and other party leaders’ claims — that the election had been stolen and that Republicans had the power to block Joe Biden’s victory from being certified — “would lead to violence on January 6th.”

And at the bottom of the barrel is McCarthy, now publicly backing Cheney’s ouster, which is likely to come to a vote Wednesday. Last week, in hot-mic remarks, McCarthy said: “I’ve had it with her. You know, I’ve lost confidence.” Instead, he’s backing a challenge by Rep. Elise Stefanik (N.Y.), who is far less conservative than Cheney but has the essential credential of supporting Trump’s “big lie” about the election — including the bamboo boondoggle in Arizona.

Michael Gerson has perhaps the most scathing -- and therefore most accurate -- assessment:

Rep. Elise Stefanik (R-N.Y.) is a short, sad story of misdirected ambition. McCarthy is in a very different category. In a crisis of national identity, he has done what comes easy to him. He has shown only shallowness, cravenness and negligence. He has been a quailing, simpering paragon of mediocrity. It is the work of a political hollow man — a Buchanan all our own.

The bad news? McCarthy’s party does have a good shot at winning the House in 2022. Smallness of spirit and vision may well be rewarded.

The good news? The 15th president was followed by the 16th president. America has a history of finding large leaders in times of greatest need.

His move to oust Rep. Cheney from her leadership position is only the most recent, high profile sign of McCarthy's meek capitulation to Trump, a twice impeached, two time popular vote loser.

Shallow, craven, "quailing, simpering paragon of mediocrity," absolutely.  But coward, most of all, coward.