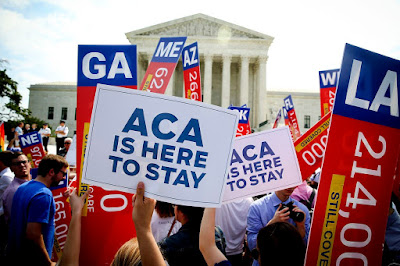 A momentous, if somewhat unexpected (by us) ruling:

The Supreme Court has dismissed a challenge to the Obama era health care law, preserving insurance coverage for millions of Americans.

The justices, by a 7-2 vote, left the entire law intact Thursday in ruling that Texas, other Republican-led states and two individuals had no right to bring their lawsuit in federal court. The Biden administration says 31 million people have health insurance because of the law popularly known as “Obamacare.”

The law’s major provisions include protections for people with pre-existing health conditions, a range of no-cost preventive services and the expansion of the Medicaid program that insures lower-income people, including those who work in jobs that don’t pay much or provide health insurance.

Also left in place is the law’s now-toothless requirement that people have health insurance or pay a penalty. Congress rendered that provision irrelevant in 2017 when it reduced the penalty to zero.

The elimination of the penalty had become the hook that Texas and other Republican-led states, as well as the Trump administration, used to attack the entire law. They argued that without the mandate, a pillar of the law when it was passed in 2010, the rest of the law should fall, too.

And with a more conservative Supreme Court that includes three Trump appointees, opponents of Obamacare hoped a majority of the justices would finally kill off the law they have been fighting against for more than a decade.

But the third major attack on the law at the Supreme Court ended the way the first two did, with a majority of the court rebuffing efforts to gut the law or get rid of it altogether. (our emphasis)

Republican Justices Gorsuch (Trump appointee) and Alito (Dumbya) were the two dissenters.  It must sting to know that two other Trump appointees, Kavanaugh and Coney Barrett, voted to save Obamacare.

It's reasonably safe to say that the Affordable Care Act (Obamacare) is now bulletproof against further assaults by the right, and will be preserved into the future (or at least until it's replaced by universal health care!).  It's a good day for America, and especially for the 31 million Americans who can feel secure that they can keep their health insurance (or to quote then- VP Biden after Obamacare was signed into law: "This is a big fucking deal.")

It’s a big deal that the Affordable Care Act is here to stay. Reminder: You can sign up for health care at https://t.co/3CYKhP8ZoR—help us spread the word.

Asshat insurrectionist and terrorist Josh Hawley ran against McCaskill by being one of the Repub AGs supporting this lawsuit; and at the same time running an ad pitch about his son having a preexisting condition, and that he was going to end the mess with preexisting conditions. Truly a great populist fighting for the hard working white man.

Mart -- you can always find him on the right side of history!