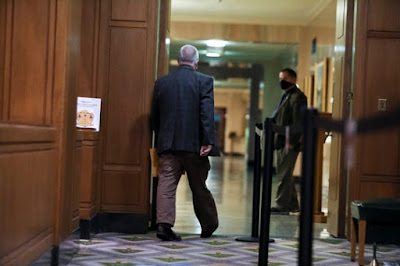 Last night, the Oregon State Legislature voted to expel dangerous Trumpist hack Rep. Mike Nearman for giving rioters access to the closed Capitol building during the Legislature's closed session. The vote was a devastating 59 -1, with Nearman being the sole vote against expulsion. It's the first time in Oregon's history that a legislator has been expelled.

On December 21, Nearman was on security camera video walking through a secured door and allowing rioters -- many armed and with body armor -- into the Capitol. It was only after police were assembled that the mob was removed. What made his conduct especially egregious is that on December 16 he spoke to a right-wing group, giving them his cellphone number and encouraging them to alert him when they were outside the Capitol building in what he thought was a sly way.  He later lied to his Republican colleagues about making the remarks, which apparently cost him their support once a video surfaced.

(photo: Buh-bye, and don't let the door you opened hit you in the ass. Brian Hayes / Salem Statesman Journal)