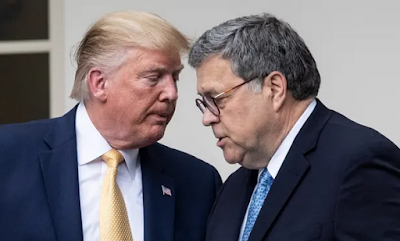 More evidence of the disgusting politicization of the Justice Department under the former guy and William "Low" Barr:

The Justice Department in 2018 secretly subpoenaed Apple for the data of two Democrats on the House Intelligence Committee, as well as the data of their current and former staffers and family members, in an aggressive push by the Trump administration to determine who was leaking classified information to the news media, according to a committee official and one of the affected lawmakers.

The department sought data on two lawmakers from California who were prominent critics of President Donald Trump — Rep. Adam B. Schiff, then the panel’s ranking Democrat and now its chairman, and Rep. Eric Swalwell — the committee official and Swalwell said Thursday night. The committee official, who like others spoke on the condition of anonymity because the matter remains politically sensitive, said that Apple in May had notified at least 12 people connected to the panel of subpoenas for their data, and that one minor was among them.

Democrats swiftly condemned the moves, news of which followed three recent disclosures to national media organizations that the Trump Justice Department had secretly sought reporters’ phone and email records in an effort to identify the sources of leaks.

“President Trump repeatedly and flagrantly demanded that the Department of Justice carry out his political will, and tried to use the Department as a cudgel against his political opponents and members of the media. It is increasingly apparent that those demands did not fall on deaf ears,” Schiff said in a statement. “The politicization of the Department and the attacks on the rule of law are among the most dangerous assaults on our democracy carried out by the former President.”  (our emphasis)

Keep in mind, this targeting of political opponents, and their families, by the former guy and his lickspittle AG was not for the purpose of ferreting out people who might have compromised national security, but was entirely to find out who was exposing wrongdoing by the former guy and others in his assministration.  That lickspittle AG, William Barr, lied to a Senate committee when he feigned ignorance on whether the former guy had asked him open any investigations.  Add that to the already long list of particulars for why Barr should lose his law license.

Meanwhile, you can bet that Rep. Schiff in particular will pursue this with the Justice Department to find out who else was a party to this (to use a former guy phrase) "witch hunt."