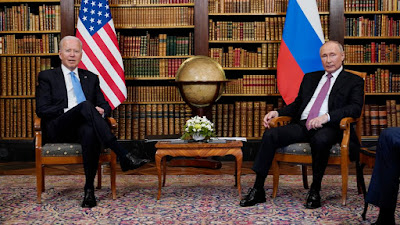 As President Biden and his diplomatic team meet with Russian thug and autocrat Vladimir Putin and their counterparts in Geneva today, Putin has already won in one aspect. He's elevated himself on the world stage by this public and ballyhooed meeting with Biden, with no preconditions on his part for the "summit." He's going to deny responsibility for everything from the cyber attacks, to election interference, to Russia's continuing paramilitary presence in eastern Ukraine. He laughs off the brutal treatment of his rival Alexei Navalny and American hostages Paul Whelan and Trevor Reed. He won't stop being the agent of chaos internationally to weaken the U.S. and its allies abroad and at home because it benefits him politically inside Russia to project "strength" and "defending Russia."  In other words, status quo.

Watching the Swiss put on a pomp-and-circumstance show with Russian and U.S. flags decorating the streets of Geneva and breathless wall-to-wall media coverage is more than what should have happened. Russia is pulling off what North Korean dictator Kim Jong-Un did, when international pariah Kim stepped on to the world stage with narcissistic buffoon and sociopath Donald "Loser" Trump as an "equal," something Kim's father and grandfather never achieved. From Putin's standpoint, he has already gained much and given up nothing:

"The Russian president’s one-on-one with NBC has been widely aired and much discussed across state media platforms. [snip]

As Putin was pressed on issues including Moscow’s cyberattacks against the United States and whether he orders the killings of his political opponents, his tone was dismissive and, at times, nonchalant. It mirrored the Kremlin messaging at home ahead of Putin’s planned summit with President Biden in Geneva on Wednesday: Putin agreed to this meeting at the request of the Americans but will not be ceding anything.  (our emphasis)

So Putin's already characterizing the meeting as Biden asked me for it, and I condescended to accept, even though nothing's going to change. More from the above link:

'Putin’s recent messages to the wider world are less about what he can do together with the American president, and more about what Russia can do alone — and, if need be, against the wishes of the U.S. government,' Dmitri Trenin, head of the Carnegie Moscow Center, wrote in a commentary."  (our emphasis)

Even Biden's faint praise of Putin as "smart" and a "worthy adversary" will signal Putin that Biden wants a deal on something, even if we know that Putin will turn around and violate any deal at some point.

In the age of Zoom and teleconferencing, this "summit" would have been more to the U.S.'s advantage -- and less to Putin's -- if we'd gone that route instead.

BONUS: Let the miscues begin. That's what it's all about for our broken media covering the "summit", and why a private meeting would have been preferable.

Guys - You should go to Paul's go fund me page for more info. #Free Paul Whelan. It has been good to see so much about him in the press recently. We continue to write to him weekly and received our second letter from him in late May. He is at least receiving some of our letters, but we have each written 50 letters since June last year. Our next effort is to send him some books. P.E.C.

P.E.C. -- Thanks for noting the #Free Paul Whelan site. With the spotlight on him and Trevor Reid, we hope their long and unjust ordeal will be soon over.