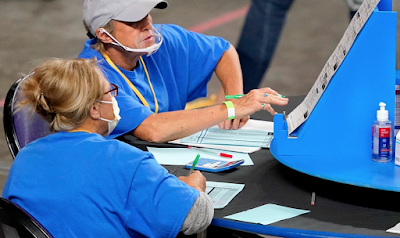 The threat to our democracy posed by the malignant former guy's delusions continues:

Donald Trump lashed out Monday at two Pennsylvania Republicans who he said are resisting an audit of the 2020 presidential election.

"Why is Senator David Argall playing the same game? Are they stupid, corrupt, or naive? What is going on?" Trump asked.

The former president added that other state senators want the audit to take place "immediately" and that those opposing it will face repercussions.

Several frothing Trump dead- enders from the Pennsylvania legislature have already visited Arizona to model how they're undermining confidence in the 2020 election through their sham version of an "audit."  It appears most of the impetus for a similar jerk- off is in the state Senate, most particularly in the form of one scrote named Doug Mastriano.  The problem for them is, unlike in Arizona with its nearly unified Republican control of state government, that Pennsylvania is administered by Democrats who aren't going to let this get underway.  State Attorney General Josh Shapiro has made it clear on many occasions that any "audit" would have to go through him, and it isn't going to happen.

But as long as the narcissist former guy has breath, he'll badger the weaklings as well as the true believers in his rotted out party to go forward with these scams, whether in a lunatic belief they'll "restore" him to office, and/or to assuage his delicate ego and provide a fundraising grift.