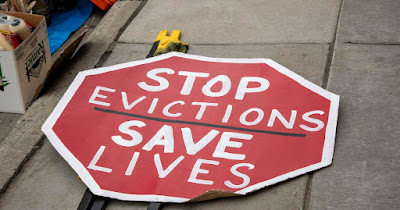 At midnight tonight, the moratorium on evictions expires, which could result in up to 11 million people being evicted from rental properties in the weeks ahead. Originally, the Centers for Disease Control and Prevention (CDC) issued the ban, but a challenge by landlords to their authority was upheld by the Supreme Court, which ruled that Congress would have to extend the moratorium through legislation. Late yesterday, nihilist Republicans in the House killed a unanimous consent request to extend the moratorium for six more weeks. The House then adjourned for August recess.

The maddening aspect, in addition to the Rethugs' action, is that $46 billion has been appropriated for rental assistance, but only approximately $6 billion has been spent by state and local governments. The dropped ball now is in the hands of state and local governments, who have to find some means of holding landlords at bay until the funds start flowing. The prospects for that to happen aren't good. From the Washington Post article:

"Just 36 out of more than 400 states, counties and cities reporting data to the Treasury Department were able to spend half of the money allotted them by the end of June. Another 49 hadn’t spent any funds at all.

The reasons are manifold. Before the pandemic, the country had no infrastructure to quickly pump billions of dollars of rental relief to those who need it. As states and cities rushed to build their own programs, they were dogged with confusion, glitches and false starts."

With the Delta variant surging, there's not a worst time to be putting people out in the street or filling homeless shelters to the max. As a housing expert said:

“Without swift intervention to scale with the eviction crisis, the rental assistance will arrive too late to prevent widespread housing loss and its damaging effect on the nation’s health," said Emily Benfer, a housing expert at Wake Forest University. "At this moment of uncertainty in the war against covid-19, we can’t afford to drop one of the major primary prevention tools we have.”

With billions allocated for rental assistance, there was no excuse for this to happen.
Posted by Hackwhackers at 10:30 AM