Tracking Down The Insurrectionists, Cont. 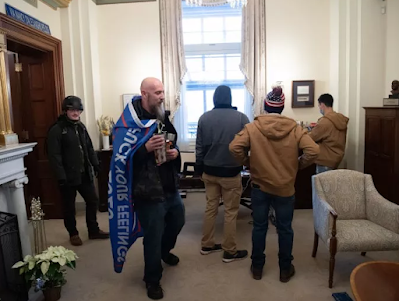 It was the best of days, it was the worst of days:

A man charged in the insurrection at the Capitol on January 6 allegedly described his time inside Speaker of the House Nancy Pelosi's (D-Calif.) office as part of "the best day of his life."

A witness anonymously contacted the FBI on January 9 to inform the agency that Smith was one of the rioters and had been openly bragging about his exploits. A tip that the FBI received days later, from a person who said they were the alleged rioter's coworker, indicated that Smith had shared presumably doctored videos and photos of himself and others "storming the white house" while bragging about being inside Pelosi's office.

"I work with a man who showed up with pictures and video of him and others storming the white house," the witness said, according to the criminal complaint. "He says he was in Nancy Pelosis office and that it was the best day of his life."

Our bet is that Smith still hasn't seen the worst day of his life. 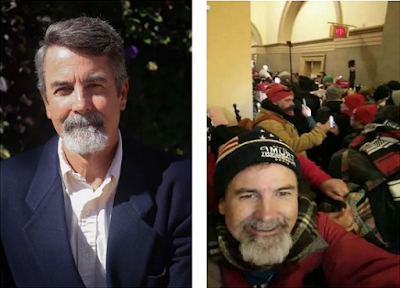 The hypocrites that pray together go to jail together:

Glenn Allen Brooks of Huntington Beach, California has been charged with disorderly and disruptive conduct in a restricted building or grounds, along with disorderly conduct and parading, demonstrating, or picketing in a Capitol building.

In the criminal complaint against Brooks, the FBI explained how he was identified.

"On or about January 30, 2021, the FBI received an electronic tip from Witness #1, who stated that a member of his/her church prayer text group, Glenn Brooks, boasted of his active participation in the January 6, 2021, events at the U.S. Capitol in Washington, D.C. Witness #1 also stated that Brooks sent photos of his attendance at the Capitol to the church text group that included other people at the riots/protest and a selfie photo of himself inside the Capitol," an FBI special agent attested.

The witness also provided a photo of Brooks and said a selfie photo taken inside the Capitol also depicted Brooks.  (our emphasis)

The FBI is still looking for many of the insurrectionists.  Check out their web site to see if anyone looks familiar.