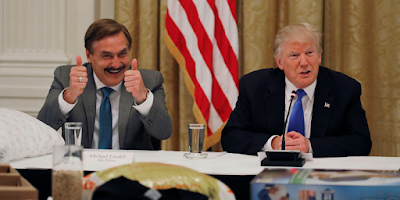 Right-wing Christofascist and delusional Trump fanatic Mike "Pillow Guy" Lindell's mission in life over the past several months has been to proclaim Trump's "Big Lie" of a rigged election far and wide. He's being sued for $1.3 billon by Dominion Voting Systems for defamation after lying about their voting machines switching votes from Trump to President Biden. His company's pillow has been dropped by numerous stores like Bed, Bath and Beyond and Kohl's after Lindell kept up the crazy even after the January 6 insurrection.

He's been trying to get the word out that he's holding a three-day "Cyber Symposium" snoozer beginning August 10 to push the "Big Lie," and force the Supreme Court to declare his Dear Leader the legitimate President, which they can't and won't do. (He's promised that Trump will be "reinstated" on August 13, which is also when the Earth will end). He's angry that the usually reliable purveyor of falsehoods Fox "News" won't promote the event or run ads for it, so he's pulled all of his pillow ads from Fox, despite years of their sycophantic treatment of him.  That's tens of millions of dollars out of Fox's bottom line, especially for their prime time lineup which relied on the Pillow Guy's silly ads for revenue. Remember that this past spring, he announced that he was "investigating" Fox for not being sufficiently obsequious to Dear Leader.

We can't wait to see if Lindell's crack-damaged brain will spontaneously combust on August 14 after his date certain has come and gone, and his malicious Dear Leader is still holed up in one of his flea-infested properties. In the meantime, do grab that money out of Fox's hands, for they are the worst traffickers in lies, bigotry and sedition (see Quote of the Day, below).