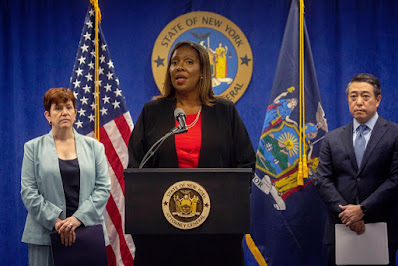 Just a short time ago, New York State Attorney General Letitia James announced the findings of an investigation into allegations by 11 women that New York Gov. Andrew Cuomo engaged in sexual harassment of current and former State employees. The report can be found here.  Here's what the Executive Summary has to say:

"We, the investigators appointed to conduct an investigation into allegations of sexual harassment by Governor Andrew M. Cuomo, conclude that the Governor engaged in conduct constituting sexual harassment under federal and New York State law. Specifically, we find that the Governor sexually harassed a number of current and former New York State employees by, among other things, engaging in unwelcome and nonconsensual touching, as well as making numerous offensive comments of a suggestive and sexual nature that created a hostile work environment for women. Our investigation revealed that the Governor’s sexually harassing behavior was not limited to members of his own staff, but extended to other State employees, including a State Trooper on his protective detail and members of the public. We also conclude that the Executive Chamber’s culture—one filled with fear and intimidation, while at the same time normalizing the Governor’s frequent flirtations and gender-based comments—contributed to the conditions that allowed the sexual harassment to occur and persist. That culture also influenced the improper and inadequate ways in which the Executive Chamber has responded to allegations of harassment."  (our emphasis)

In her news conference, Attorney General James repeatedly stated that "I believe the women" after a lengthy investigation in which 179 people were interviewed and 74,000 pieces of evidence were produced. James would not speculate on actions that some might take going forward, including censure or impeachment by the State Legislature (whose investigation is sure to be energized by James' findings), but it should mark the end of the political career of Gov. Cuomo, who was contemplating running for a fourth term.

As an aside, can you imagine a current-day Republican Attorney General, whether at the state or Federal level, bringing forth a report of this kind against a Republican Governor or President?

Posted by Hackwhackers at 1:00 PM