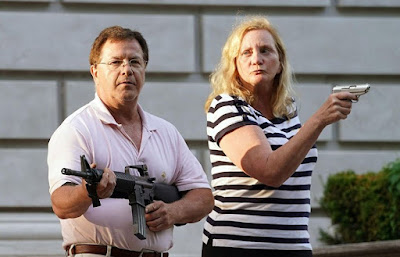 During last summer's Black Lives Matter marches after the killing of George Floyd, a right-wing St. Louis couple became infamous for waving guns at peaceful (mostly black) marchers who were passing by the front yard of their tacky faux castle on their way to the mayor's home. Racist personal injury lawyers Mark and Patricia McCloskey were arrested on charges of fourth degree assault and misdemeanor harassment and were fined accordingly. They subsequently became martyrs to the right-wing Trumpist gun fetishist cult, and so they were pardoned yesterday by Missouri's incompetent right-wing Governor Mike Parson (Party of Death - MO).

The incident raised McCloskey's profile among Missouri's right-wing Trumpists, and now he's running for the Senate seat of retiring Sen. Roy Blunt (Sedition-MO). He even made an appearance at last year's Rethuglican / Trumpist Party Convention to whine about "gun rights" and their "persecution".

It's worth noting that Parson leads a state with one of the worst outbreaks of the Delta variant, a fact that he's met with restrictions on masks and other health safety precautions. But as a member of the Party of Death, Parson's pardoning of these two gun-flashing racist clowns was his priority.