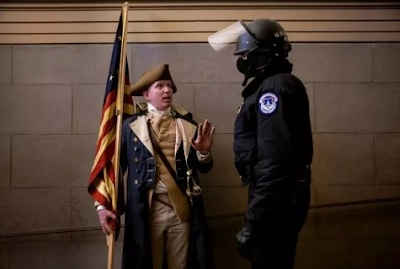 Cosplay "George Washington" became the latest deluded MAGAt sap to be arrested and charged by the FBI for his part in the January 6 insurrection:

A Nevada, Missouri, man has been arrested and charged for his role in the January 6, Capitol Insurrection. A warrant for arrest of Isaac Samuel Yoder was served on Wednesday, August 4th at Springfield, Missouri.

An online tip to the FBI National Threat Operations Center submitted on February 26, 2021 stated, “I was made aware that an individual that works at Yoder locksmith in Nevada Missouri was involved in the storming of the Capitol on Jan 6th. I am unsure of the gentleman’s first name but know the day of the event he was inside the Capitol and was dressed as George Washington.”

With this information, the FBI reviewed the business’ website and contact numbers and found an image of a man in colonial period attire captioned “Isaac & Kelly Yoder.”

After cross-referencing the website picture, a Missouri driver’s license photo, social media accounts, photographs from inside the Capitol, CCTV footage, and cell phone usage during the Insurrection the FBI ID’d the man as Yoder. [snip]

According to a complaint from the United States District Court for the District of Columbia, Yoder committed multiple violations against United States Code while at the Capitol.

"Most of us out there are on the side of the aisle who are the gun owners. If we had collectively gone there to cause trouble there would have been piles of bodies. We could have leveled things."

Luckily, as we all know, no trouble was caused by the peaceful insurrectionists tourists, and no bodies were inconvenienced, much less killed.  But just think what might've happened if Yoder had brought his musket.

The FBI is still looking for many of the insurrectionist morons.  Check out their web site to see if anyone looks familiar.