Nominated for the "didn't age well" Hall of Fame --

This statement, sent out at 11:07pm last night, did not age well. The “highly respected auditors” confirmed Biden’s victory in Arizona. pic.twitter.com/bEJejQDqqw

The point of Republican fraudits --

Agree with @ThePlumLineGS: media should stop saying Arizona “audit” confirms Biden’s win, which we already know, and focus on how entire point was to manufacture lies to lay groundwork for even more egregious voter suppression https://t.co/gnJuKX4DRM

the fake audit may have inadvertently affirmed biden’s victory in arizona but that won’t matter because “the election was stolen” is an ideological belief about the proper order of things, and not a factual claim.

Is that the Giant Toddler's ride? -- 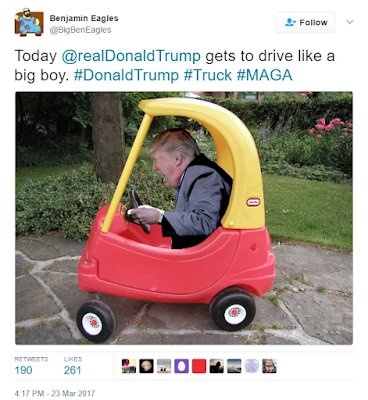 Labels: Tweets of the Day

How many times does Treason Trump have to lose before his radical extremist cult stops wasting millions of taxpayer dollars on sore loser election lies? Democrats are focusing on working class infrastructure, jobs, and stimulus, while the antiivax GQP focuses on nonsense. #VoteBlue

Saw someone somewhere comment that the analysis of all the vote info they've been doing could be put to good use next time around for contact lists, voter turnout efforts, database enhancement, etc. etc.

This seems like a really good point, it's a little under the radar.

Because while Democrats do spend at least a little time passing laws and with policy what-not, the GOP seems to almost entirely work towards winning the next election and keeping their voters all worked up.

DK -- It's hard to fathom, but when you're in a cult, you can convince yourself to believe anything.

bt1138 -- that is a good point. It seems to be a good reason why the Pennsylvania Trumpers are starting with subpoenas for SSNs, drivers license #s, etc.