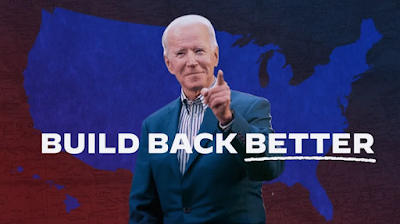 President Biden plans to announce Thursday a revised framework for his social spending plan that he expects will gain the support of all Democrats, according to multiple people with knowledge of the situation, marking a potential breakthrough after months of lengthy negotiations and stalled talks.

The White House plans to detail specific policies it expects to pass Congress after weeks of whittling down Biden’s agenda, according to one of the people. Democrats on Capitol Hill were preparing written details of the revamped proposal for release on Thursday, according to the second person.  [snip]

Biden will address House Democrats Thursday morning before delivering remarks from the White House about the plan. Biden’s speech comes ahead of his planned trip to Rome later in the day to begin a pair of international summits.

The specifics of what the president would announce were not immediately clear, nor was it clear whether he would be prepared to announce the support of key Democratic holdouts. But Biden recently told congressional Democrats that he thought he could secure a deal for a spending plan between $1.75 trillion and $1.9 trillion.   [snip]

House Speaker Nancy Pelosi (D-Calif.) announced Wednesday that the House Rules Committee would hold a key procedural hearing on Thursday, a move that would allow lawmakers to eventually bring the measure to the chamber floor.

A breakthrough in the talks could clear the way for passage of a companion measure to invest in the nation’s roads, bridges and other public works. (our emphasis)

Well, we know paid leave won't be included, and we don't know how climate change, Medicare expansion and other Biden priorities will or won't be addressed.  And there's still the matter of what revenue deal has been reached.  Biden has stated any priority left out of the Build Back Better bill will be addressed in other legislation -- but that will eventually require at least two more Democrats in the Senate after 2022 to dilute the stranglehold of Sinemanchin.