The Star-Struck Sucker And The Con 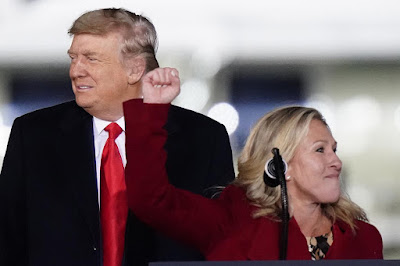 In her constant zeal to suck up to her cult leader, the execrable, unhinged gym rat turned Congresscritter Marjorie "Traitor" Greene (Sedition-GA) is reported to have bought stock in Dear Leader's latest scam, a media venture to air his endless grievances and lies:

"Greene, an ardent Trump supporter, on Friday purchased between $15,001 and $50,000 in shares of Digital World Acquisition Corp. The firm is a SPAC, or special purpose acquisition company, created to buy another business and give it a stock-market listing. Digital World trades on the Nasdaq exchange under the ticker 'DWAC.'

Digital World’s stock price swung widely on Friday, opening at $118.79 per share and rising as high as $175 per share. At its lowest, a share in Digital World sold for $67.96 that day. It is not clear what price Greene bought the shares at."

Ever since lying demagogue and seditionist leader Donald "Loser" Trump was banned from Twitter and Facebook, he and his cult have been searching for a platform where they can indulge themselves in conspiracy theories, slander, lies and coup planning. His says he plans to launch a Twitter-like platform called, in very Orwellian fashion, "Truth Social," but his real intention is likely another money-raising scam, using a vehicle called a Special Purpose Acquisition Company. He can raise millions from investors and pocket much of the loot himself.

Let's hope this latest scam falls apart, but not before his grift fleeces investors of their money, among them the ass-kissing Greene.

(photo: A fool and her money are soon parted.  AP / Brynn Anderson)