Tracking Down The Insurrectionists: Not-So-Invincible Man 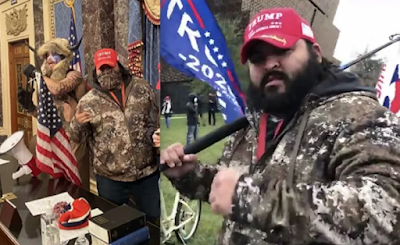 Virginia Cletus Landon Mitchell, a.k.a. "Invincible Man," turns out to be vincible, goes down:

On Jan. 6, Landon Mitchell bragged to a Facebook friend that he “breached the Capitol” and was “one of the very first in” when a pro-Trump mob stormed the halls of Congress. He appeared in video on the floor of the U.S. Senate, went through a senator’s desk and took to the dais, where he posed next to the so-called QAnon Shaman.

Later, when a friend feared that the FBI might arrest Mitchell, he wrote that he was “invincible” and “not too worried” because he “was masked up the whole time” he was inside the Capitol.

The FBI arrested Mitchell on Wednesday.

Fellow seditionist Luke Bender (arrested on July 29) identified Invincible Man when he was interviewed after his arrest.  Is there no honor among traitors!?!

Check out #SeditionHunders on Twitter or go to the FBI's Capitol violence web page to see if you can help identify any of the at- large lowlifes.