Pic Of The Day: The Shambles 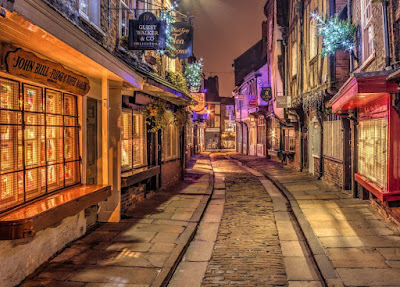 A street named The Shambles in York, England is reputed to be the best-preserved medieval street in England, if not Europe. According to the York history home page:

"The Shambles’ is sometimes used as a general term for the maze of twisting, narrow lanes which make York so charming.  At its heart is the lane actually called the Shambles, arguably the best preserved medieval street in the world.  It was mentioned in the Doomsday Book of William the Conqueror in 1086.  Many of the buildings on the street today date back to the late fourteenth and fifteenth century (around 1350-1475).

The Shambles was a street of butchers’ shops and houses, many complete with a slaughterhouse at the back of the premises, ensuring a ready supply of fresh meat.  The meat was hung up outside the shops and laid out for sale on what are now the shop window-bottoms.  It is still possible to see some of the original butcher’s meat-hooks attached to the shop fronts."

This beautiful, evocative photograph of The Shambles was taken by David Oxtaby for the 2021 Historic Photographer of the Year Award, and placed among the finalists.

Labels: pic of the day, the Shambles in York England