The Freaks Are Feasting On Each Other 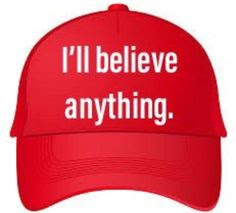 Eventually, delusion, paranoia and brain worms just take over what little there is in the MAGA/ low- IQAnon / fascist mind, conspiracies beget conspiracies, and uncivil "civil wars" are waged.  Let's feast on their fighting:

On Saturday night, pro-Trump lawyer and QAnon booster Lin Wood released a recording of what purports to be a phone call between Wood and Flynn on Telegram. The audio’s publication comes amid a right-wing civil war pitting Wood against one-time allies like Flynn and other figures involved in the 2020 attempt to overturn the election.

In the call, Wood complains to Flynn that his QAnon supporters had attacked Wood online. But Flynn attempts to disown QAnon, claiming it’s a “disinformation campaign” created by the CIA.

“I find it total nonsense,” Flynn said. “And I think it’s a disinformation campaign created by the left.”  [snip]

Wood’s publication of the audio comes as part of a growing feud between Wood and Flynn and other figures active in the attempt to overturn the 2020 election. The fight kicked off last week when recently acquitted Kenosha shooting defendant Kyle Rittenhouse, a former Wood client, accused Wood in a Fox News interview of deliberately keeping him in jail to raise money off of his case.

Suddenly under attack by Rittenhouse, Wood grew publicly furious that allies like Flynn and pro-Trump lawyer Sidney Powell weren’t strenuously defending him. The ensuing clash has consumed QAnon and other far-right communities over the past week, while Wood grows increasingly hostile, even claiming at one point that a plane he was set to take a flight on was sabotaged in an attempt to kill him.

Former Trump campaign adviser Steve Cortes is out at Newsmax and will host his last primetime broadcast for the right-wing cable channel early next week, if not sooner, five sources familiar with the matter told The Daily Beast.

Tensions between Cortes and the MAGA cable network had long been simmering, sources suggested, but it was the Trump loyalist’s vehement disagreement—which he wasn’t shy about publicly voicing—with Newsmax’s company-wide vaccine rules that was the final straw. [snip]

“I will not comply w/ any organization’s attempt to enforce Biden’s capricious & unscientific Medical Apartheid mandate,” he blared in one tweet. “I will not be forced into the injection, nor will I disclose my vaccination status. No one should be pressured to choose between medical privacy & their job.”

Cortes publicly bashing his employer’s decision may have been the final straw, but insiders said the former Trump campaign strategist and ex-CNN contributor has long conflicted with Newsmax.

“It’s been ongoing for a while,” one current Newsmax staffer told The Daily Beast, adding that Cortes is “a constant risk” due to his penchant for making controversial and inflammatory comments.

“He’s on a delay. Can’t trust him,” the staffer further noted, claiming Cortes’ nightly program utilizes a broadcast delay to give the network an opportunity to censor potentially inappropriate content.  (our emphasis)

Then there's the split among low- IQAnon adherents as to whether John F. Kennedy, Jr., is still alive and ready to join the Malignant Loser in his quest to regain the presidency:

The theory is strange even by the standards of QAnon – which claims Democrats and Hollywood celebrities are involved in a secret cannibalistic cult which Donald Trump is secretly battling, a theory expounded in cryptic internet messages by a mysterious prophet-like figure known as Q. And while only a fraction appear to believe the JFK Jr angle, experts say it is still damaging to their relationships and their grasp on reality.

Will Sommer, author of the upcoming book Trust the Plan: The Rise of QAnon and the Conspiracy That Reshaped America and a longtime observer of the conspiracy theory, estimates that about 20 per cent of Q followers believe in JFK Jr’s re-emergence, but that those who do, “100 per cent believe”.

“QAnon itself is obviously pretty dangerous. It’s hard to say whether the people who believe the JFK Jr [conspiracy] are more dangerous than the QAnon people who don’t,” he told The Independent.

To settle things, our modest proposal is that everyone adhering to these "theories" and half- baked "beliefs" -- anti- vaxxers, low -IQAnon, Stop the Steal- ers, etc. -- need to engage in hand- to- hand combat, with appropriate medieval weaponry, with no quarter given!  Last person standing will get the handsome hat pictured above.

As the hat meme, there are plenty of things they won't believe, e.g. that taking the COVID vaccine is a wise decision.

PRW -- the converse being that the COVID vaccine is dangerous because it changes your DNA, etc.