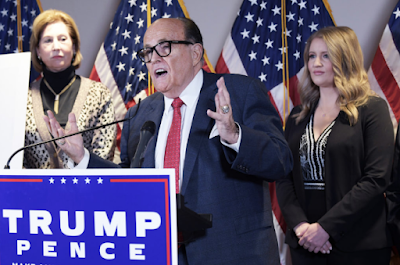 The House committee investigating the Capitol insurrection issued a new batch of subpoenas Tuesday to some of Donald Trump’s closet advisers, including Rudy Giuliani, as the committee inches closer to the former president.

The committee is continuing to widen its scope into Trump’s orbit, this time demanding information and testimony from Giuliani, Jenna Ellis, Sidney Powell and Boris Epshteyn. All four publicly defended the president and his baseless voter fraud claims in the months after the 2020 election.

“The four individuals we’ve subpoenaed today advanced unsupported theories about election fraud, pushed efforts to overturn the election results, or were in direct contact with the former President about attempts to stop the counting of electoral votes,” Mississippi Rep. Bennie Thompson, Democratic chairman of the panel, said in a statement.

The committee said it is seeking records and deposition testimony from Giuliani in connection to his promotion of election fraud claims on behalf of Trump. The panel is also seeking information about Giuliani’s reported efforts to persuade state legislators to take steps to overturn the election results.

These sad mooks -- some of the Malignant Loser's closest advisers -- operated under the "color of law," in contravention of the law, to overturn the 2020 election.  The likelihood of their cooperating is somewhere between slim and none, but the subpoenas had to be issued as part of the case the committee is building that's moving inexorably toward the ultimate perp, the Malignant Loser himself. The committee already has material witnesses who've testified and provided documentation relevant to this crew, to be sure.  Cooperate or not, these dead-enders are facing the distinct likelihood of criminal referrals.