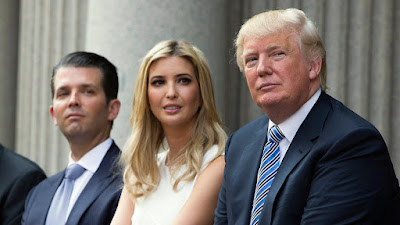 Shoes dropping all over the place:

The New York attorney general's office said late Tuesday it had told a court that its investigators had uncovered evidence that President Donald Trump's company used "fraudulent or misleading" asset valuations to get loans and tax benefits.

Attorney General Letitia James' office detailed its findings in a court motion seeking to force Trump, his daughter Ivanka Trump and his son Donald Trump Jr. to comply with subpoenas seeking their testimony.

The court filing said state authorities haven't yet decided whether to bring a civil lawsuit in connection with the allegations, but that investigators need to question Trump and his two eldest children as part of the probe. [snip]

In the court documents, James' office gave its most detailed accounting yet of its investigation into allegations that Trump's company repeatedly misstated the value of assets to get favorable loan terms or slash its tax burden.

The Trump Organization, it said, had overstated the value of land donations made in New York and California on paperwork submitted to the IRS to justify several million dollars in tax deductions.

The company misreported the size of Trump's Manhattan penthouse, saying it was nearly three times its actual size - a difference in value of about $200 million, James' office said, citing deposition testimony from Trump's longtime financial chief Allen Weisselberg, who was charged last year with tax fraud in a parallel criminal investigation.

Of course, other than the effort to compel testimony from the Trump Crime Family, most of the facts of the filing are fairly public (the New York Times has published reams about the fraudsters' business dealings, including a Pulitzer Prize winning 5-part series detailing the fraud and evasions).  But it takes on a whole different meaning when a powerful State Attorney General brings those facts up in a detailed legal motion that implicates the Malignant Loser, his unloved oldest son and his daughter/wife.  It's unclear how much, if any, evidence has come from Weisselberg (who has otherwise set himself up as the Trump Crime Family's fall guy), but "additional evidence" beyond what Weisselberg may or may not have provided is in the hands of the investigators (can you say "Michael Cohen"?).

With the January 6 committee closing in on his culpability in the insurrection, the New York AG's investigation heating up, and the Manhattan DA's parallel criminal investigation, the Trump Crime Family's time in the barrel is upon us.  (Lock them up!)

If true, this is an encouraging sign of what may be going on behind the scenes at DOJhttps://t.co/xHlPejm2fM

Going to wait until the day after the statute of limitations expires and then say we can prove it but alas too late.
Or go into court purposefully make a reversable prosecutorial error and let him skate.
That is how Garland is going to protect the "institions" that were created to protect the wealthy and powerful.