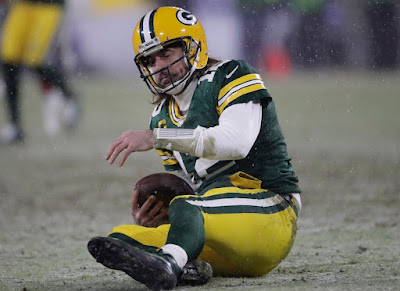 How sweet it is:

The Aaron Rodgers revenge tour has officially been canceled. After months of lamenting the “woke mob,” vaccine mandates and even taking a recent shot at the “fake White House,” cancel culture finally got the Green Bay Packers quarterback.

His undoing was of the more traditional variety, coming by way of poor special teams play and an offensive deflation that will leave the 2021 season as a bitter memory of unfulfilled potential. A year of promise was whacked in the most familiar of ways.

At the hands of the San Francisco 49ers, yet again. And with Rodgers failing to put his best game onto the field.  [snip]

Instead, the Packers looked flat after a week off, not to mention horribly mistake-prone on special teams, which was an area many suspected might be a postseason Achilles. That point came Saturday, ushering a 13-10 loss that drops Rodgers’ postseason record to 0-4 against the 49ers. A missed opportunity that might rank as one of the worst postseason losses in Green Bay history, considering the Packers had the best record in the NFL and were considered the best team in the NFC by a wide margin.

Now they’ll be remembered for tripping against a 49ers team led by a lame duck quarterback in Jimmy Garoppolo, just before an offseason of potentially sweeping change on the roster. It's the kind of defeat that Rodgers said left him feeling “a little numb.” And rightfully so, after he failed to throw a touchdown pass in a playoff clunker that will cast a shadow over an exquisite regular season that is likely to deliver another regular-season MVP award.

To be clear, we've been Packers fans all our lives, as was our father.  We were Aaron Rodgers fans until he revealed himself to be a very public anti- vaccine, it's- all- about- me "free thinker" who seems to get most of his free thoughts from Joe Rogan, when he's not doing his own research.  With his high profile, to the extent he's influenced any of his fans to try various Rogan- endorsed quack remedies in lieu of safe and effective vaccinations, he's done harm.  So, Aaron "Dunning- Kruger" Rodgers is free to have his free thoughts, of course, but we heartily wish he'd have those free thoughts in another NFL franchise just so we can go back to rooting for the Packers (who might then have a chance to go to the Super Bowl again).

BONUS:  Here's what the free thinker had to say about President Biden and the pandemic, and some Twitter reactions to Rodgers' downfall:

Tomorrow Aaron Rodgers is going to say he “did his own research” and found out the Packers actually won.

If there were a vaccine for choking in big games, would Aaron Rodgers get it?

Maybe @AaronRodgers12 would have played better if he listened to science @49ers #NinerGang pic.twitter.com/8AWnx6dOo1

Our best friend since our youth died this week. Like a good neighbor our friend was always there for us. Never missing like Rodgers in a playoff game against the 49ers. He was a lifelong Bears fan and it is so sad he did not get to watch the guy who owned the Bears take so many hard shots. He would have loved seeing that prick fail. Some people say it is unfair to needle the guy when he is down. Our friend would have been so happy to see it has gone viral.

Mart -- sorry about your friend; perhaps his spirit was strong in determining the outcome of the game!