The "Odious Brave New World" Of The "Right-To-Lifers" 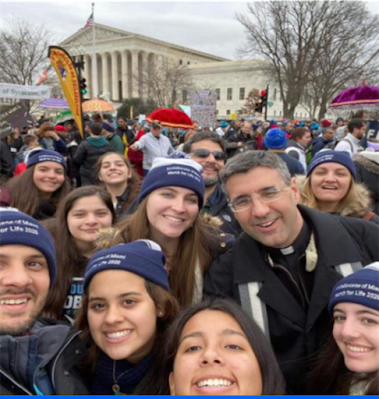 I hope you’re ready for your odious brave new world. I presume each and every one of you is planning to adopt several kids. Those chia seed-size embryos that you insist on calling pre-born children eventually will be born to parents who never wanted to be parents, and someone will need to step up to the plate. Since “adoption” has been your solution, you’re up, slugger. Surely you can spare the extra $233,000 that the U.S. Department of Agriculture in 2015 estimated it takes to raise a child from birth to age 18. (If the cost sounds steep, one of your crisis pregnancy centers might be willing to toss in a box of Huggies.)

I hope that the 364 days you’re not attending this march, you’re marching for universal health care. Also, subsidized day care and universal preschool; I hope every Chick-fil-A sandwich will now come with a side of full-time nanny.

Also, if your feet aren’t too tired, maybe you could mix in some marches for mandated parental leave for both mothers and fathers, and for free therapy for all of the people whose bodies and souls have been traumatized via forced pregnancy and forced birth.

At the very least, I hope we can count on you to vote for candidates who care about these issues with the same righteousness you brought to supporting pro-life politicians.

Of course, the vast majority of these cosseted, clueless spawn of Jerry Falwell and Pope John Paul II will never have to worry about making any tough decisions akin to those that would need to be made by the pregnant teens and women who are without the options in life that the marchers have.  In a country where 70 percent of adults don't want to overturn Roe v Wade, the organized Republican fringe has succeeded in placing a supermajority of anti- choice Republican justices on the Supreme Court, who are poised to effectively end safe access to abortions as early as June.

But once you have this thing you always wanted — state-sanctioned control over women’s bodies — your work is not finished. You are responsible for the pregnant people whose futures you have changed, and for their future children, and both are going to need a lot more than your prayers.

We all know that's a call that will fall on the deaf ears of these thoughtless pawns.

(Photo:  screenshot of Archdiocese of Miami student participants in the March for Life rally 2022 - no, we'll opt not to do a priest pedo comment/ Church of the Little Flower)

The true intent of the forced-birth ideology is to punish women who transgress sexual taboos. These freaks have no reason to want to alleviate the burden of the punishment. Just the contrary.

Infidel -- as with their political party, "the cruelty is the point."