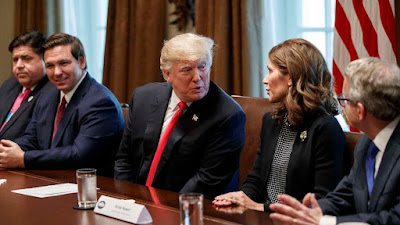 There's a hungry crop of Trumpist Republican authoritarians waiting in the wings to pick up Dear Leader Trump's torch if he backs out of the 2024 race, or lands in prison, whichever comes first. As James Downie of the WaPo writes, they're interchangeable "empty vessels" into which the far-right's talking points and delusions are poured. He focuses first on toadies South Dakota's cynical Gov. Kristi "Cowgirl Palin" Noem, and Virginia's stealth Trumper Gov. Glenn "Fleece" Youngkin to demonstrate. Downie sums it up:

"There are many reasons Donald Trump rose to prominence in the past decade — why this wannabe authoritarian easily took over one of the two major parties, and just as easily has held on despite losing reelection. Noem — and Youngkin, Cruz, DeSantis and so on — personify a key factor that gets lost in the shuffle: Aside from Trump, the party’s most prominent figures are willingly empty vessels in thrall to the GOP base. Until that changes, the GOP will stay the party of Trump. [snip]

In 2022, though, there’s no alternative to Trump in sight, only a series of toadies who want the voters to tell them what to do. In the short term, the pandemic and inflation may paper over these challenges. But U.S. history shows us that political parties can’t last purely as personality cults."  (our emphasis)

Until and unless they get successive, thorough whippings by embracing the Malignant Loser, the toadies and the unhinged base will be successful in their quest for a authoritarian, fascist America.

(photo: Dear Leader flanked by DeSantis and Noem, who seems to be getting more of Trump's "attention."  Evan Vucci/AP)