He REALLY Wants To Meet You, Sucker 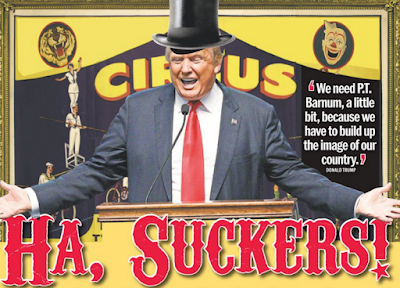 The fleecing of the Malignant Loser's sheep continues apace:

“We booked you a plane ticket,” one of the pitches said, complete with a photo of Trump superimposed in the French Quarter, beneath the dangling trademark ferns. “Contribute ANY AMOUNT RIGHT NOW to be automatically entered to have dinner with President Trump in New Orleans.”

A third pitch said: “He REALLY wants to meet you, Friend, which is why he’s holding (1) spot on the entry list for YOU only.” Some of the emails came from an account labeled “Dinner with Trump” that was set up by the former president’s leadership PAC, Save America.

But no such winner was flown to New Orleans last weekend, according to four people familiar with the matter. No flight or “very nice” hotel was booked. Trump had no individual meeting with a small-dollar donor, instead only privately greeting a handful of Republican Party donors who gave large checks, taking pictures with some of the party’s most well-heeled members and speaking to a larger group of donors who each gave tens of thousands of dollars.

The email pitches probably raised a sizable sum for Save America. Some similar contests to meet Trump have raised hundreds of thousands of dollars, according to people involved.

No one should have any sympathy for anyone stupid enough to believe, despite ample evidence over the years, the Malignant Loser's various scams.  Beyond tolerating the constant spamming ("15 emails in recent weeks"!?), a person on the receiving end of these solicitations who believed the Malignant Loser "REALLY wants" to meet them (for their $5 donation) is a yokel any grifter would love to grift.  The reward for the millions of red hat knuckle-draggers who contribute to these ongoing scams is to have their personal information embedded in various Malignant Loser-aligned direct mail and phone lists, to be spammed eternally.

Some friends of mine recently had a joint challenge to run 5 miles every day. If they failed to do so, aa small donation would be made to the Trump campaign using their contact information.

Scary threat - and it worked.

Five less bullets in their clips. I hope he gets all of their money because it is far more likely to go to waste. They dream of spending 600 million$ on a boat!

Over the past few years I have received daily requests for donations to TFG. I have no idea why I got on the list and am certainly not his "friend".
Regardless, once the invasion of Ukraine began the E-mails mysteriously stopped. Russian money dried up???