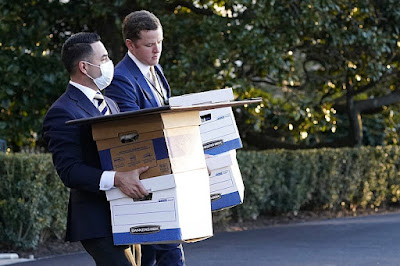 Somewhat lost in the cavalcade of misdeeds by the Malignant Loser was the news recently that a grand jury has been convened to look into his mishandling of boxes of classified documents that he took to his Merde O' Lardo residence after voters kicked him out of the White House. There's the obvious problem of mishandling classified documents, where the Malignant Loser kept those documents unsecured in his private bedroom at the White House, and then at his residence in Florida. Federal law prohibits "knowingly removing classified material without authority and with the intent to keep it in an unauthorized location.”

That said, the grand jury is convened when the prosecution (in this case the Justice Department) believes a crime may have been committed. Former FBI Assistant Director for Counterintelligence Frank Figliuzzi writes in a column that the Malignant Loser seemed well aware of the contents -- and value to him -- of the 15 boxes of classified material in his possession:

"Fifteen boxes of classified documents sitting in the residential wing of the White House doesn’t sound like a mistake to me. That sounds deliberate and less like an error that could be attributed to staff."

Figliuzzi also raises the distinct possibility that the Malignant Loser -- ever the self-enriching treasonous clod -- may have intended to use information in those documents for sinister purposes (blackmail, sale to hostile entity, etc.?):

"As Justice Department investigators examine the documents, they’ll be able to see whether the contents held some value to Trump or those around him and possibly determine whether Trump could benefit from whatever’s in those documents. We mustn’t forget that during Trump’s term, his family members parlayed their relationship with him into personal profit and that while he was president, Trump’s own businesses reportedly raked in $2.4 billion."  (our emphasis)

With the grand jury looking at the contents of those classified documents, and an aggressive prosecutorial team, we should find out more in the weeks ahead as the dots are connected to form a picture of the Malignant Loser's intentions.

"Trump’s own businesses reportedly raked in $2.4 billion." Kushner raked in $1.3 billion from Qatar and another $2.0B from Saudi Arabia. No wonder they are trying to emulate Putin's Russia. Good for business.

Mart -- Trump had a familial oligarchy going, indeed. Follow the money is the approach to take with him and
his corrupt family.