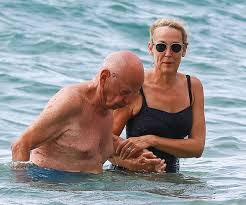 Rupert Murdoch, the far-right Australian media mogul responsible for the majority of dangerous misinformation through his properties like Fox "News" and the New York Post, has been served with divorce papers from his fourth wife, former Mick Jagger spouse Jerry Hall.  From Reuters:

Hall said in the petition filed with the Los Angeles Superior Court she was 'unaware of the full nature and extent of all (Murdoch's) assets and debts, and will amend this petition when the information has been ascertained.'" (our emphasis)

Translation: Rupert better be prepared to get the shaft while she gets the gold mine.... or so we hope. The grounds for divorce claimed by Hall were "unreconcilable differences," prompting speculation about what specific differences she is referring to, although their 25-year age difference might, just might, have contributed. Hopefully, she has a rock solid pre-nup with the nasty old buzzard after only 6 years of wedded bliss, but nevertheless, California has very wife-friendly divorce laws that should give her a nice payday. Go get him, Jerry!

BONUS:  It's further reported that, prior to Jerry filing for divorce, Rupert emailed her to tell her their marriage was over and to only communicate with him through his attorneys.  Ouch!

(photo: "Crikey, she tried to dunk me!" Woman's Day Magazine)

Posted by Hackwhackers at 12:30 PM