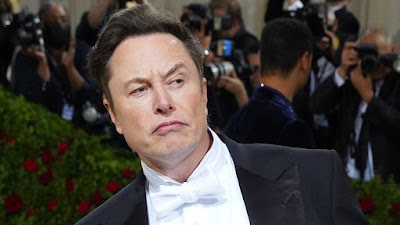 Germany's automobile safety agency KBA has issued a recall that would involve some 59,000 Tesla cars worldwide due to a software malfunction in its emergency call feature. Models Y and 3 are the ones affected by the recall; it's unclear how many are of them are in Germany. The software glitch causes a breakdown of the car's eCall feature which is supposed to contact emergency services in the event of a serious accident. ("Help, my damn Tesla's on fire!") The recall is the latest in a series of setbacks for the obnoxious right-wing Tesla brand owner Elon Musk:

"The software glitch is an added headache for Chief Executive Officer Elon Musk after Tesla on Saturday said it delivered 17.9% fewer electric vehicles in the second quarter from the previous quarter, as China's COVID 19-related shutdown disrupted its production and supply chain.

Musk said last month that Tesla's new factories in Texas and Berlin are 'losing billions of dollars' as they struggle to increase production because of a shortage of batteries and Chinese port issues.

The U.S. National Highway Traffic Safety Administration (NHTSA) early in June upgraded its probe into 830,000 Tesla vehicles with the advanced driver assistance system Autopilot, a required step before it could seek a recall."  (our emphasis)

In the past couple of years, a number of Tesla 3 vehicles have experienced fires and explosions, some believed to be caused by battery malfunctions, something that the company claims it has resolved. Musk's rush to get the Tesla to the market before other electric vehicles may be the price he paid for the car's safety.

Earth-Bound Misfit's post today points out that Tesla has a Silicon Valley mind-set that regards customers as unpaid product testers. They certainly don't seem too concerned about getting things right before selling the product.


Infidel -- True, indeed. A cost of doing business to them.