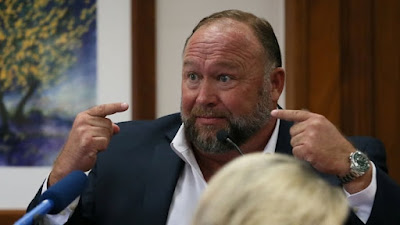 A Texas jury has decided to penalize Alex Jones with $45.2 million in punitive damages in a lawsuit filed by the parents of Sandy Hook shooting victim Jesse Lewis.

The award, which the judge could reduce, came one day after the jury settled on $4.1 million in compensatory damages.  [snip]
Punitive damages are a form of punishment for a defendant's behavior. Jones, the head of the conspiratorial media outlet Infowars, repeatedly lied about the Sandy Hook massacre. He stoked conspiracy theories about the victims and their families, prompting multiple defamation lawsuits. He has since acknowledged that the mass shooting occurred.
Jones claimed in his testimony that a jury award of just $2 million would destroy him financially. But on Friday morning the jurors heard testimony about Jones' wealth from an economist, Bernard Pettingill, Jr., who estimated Jones has a net worth of between $135 million and $270 million.

With the compensatory damages of $4 million awarded yesterday, Jones will pay a portion of the roughly $200 million he's purported to be worth.  It's only a start.  So, let the lawsuits proceed!

How long before this slug has to produce the cash?

One Fly -- not soon enough. Judgements are scheduled for September on damages Jones must pay in two other Sandy Hook defamation lawsuits.

Good to see there IS still such a thing as 'justice'.