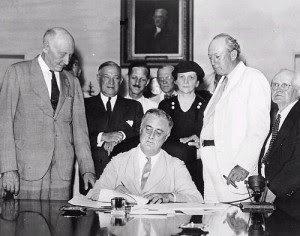 “Today a hope of many years’ standing is in large part fulfilled. The civilization of the past hundred years, with its startling industrial changes, has tended more and more to make life insecure. Young people have come to wonder what would be their lot when they came to old age. The man with a job has wondered how long the job would last. This Social Security measure gives at least some protection to thirty millions of our citizens who will reap direct benefits through unemployment compensation, through old-age pensions and through increased services for the protection of children and the prevention of ill health.

“We can never insure one hundred percent of the population against one hundred percent of the hazards and vicissitudes of life, but we have tried to frame a law which will give some measure of protection to the average citizen and to his family against the loss of a job and against poverty-ridden old age." -- from President Franklin D. Roosevelt's statement on signing the Social Security Act of 1935, August 14, 1935.  This landmark act permanently changed the relationship of government to the people (unless and until Christofascists Republicans have their way). Still under threat today by the likes of submoron Republicans like Sen. Ron Johnson (Sedition-WI), Social Security -- along with Medicare/Medicaid, unemployment compensation, etc. -- is representative of a party that has always sought to protect the vulnerable from the "vicissitudes of life," never a 100 percent solution, but far more than the "comfort the comfortable, afflict the afflicted" philosophy of the GQP would allow.

Note in the Library of Congress photo above that Secretary of Labor Frances Perkins is standing right behind FDR, appropriately, because she was the driving force behind the Social Security Act and was one of the most impactful Cabinet officers in our history.

One of the most amazing pieces of legislation ever passed in this country has had a great positive effect on by now a billion or so Americans - - - - - - - and evil bastard Republicans want to destroy it. There aren't words.

Here in my home state, they love Ron Johnson. Because he doesn't mean THEIR Social Security, he means their neighbors. Big difference. And in November he wins in a walk.