DeSantis And His KKK Appointee 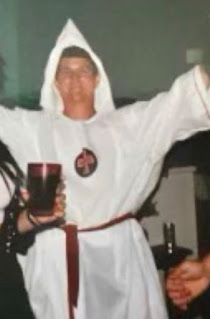 As we watch ham-faced bigot and demagogue Gov. Ron DeSantis (Sedition - FL) preen in the role of disaster manager in front of the cameras (and not acknowledging the Federal / Biden Administration assistance he's getting), it's important to highlight a recent incident that speaks volumes about his judgement and character, or lack thereof. The incident involves an appointee of DeSantis, who was photographed in a KKK outfit. The New York Times' columnist Charles Blow comments:

"In July, Gov. Ron DeSantis of Florida appointed Jeffery Moore, a former tax law specialist with the Florida Department of Revenue, to be a county commissioner in Gadsden, the blackest county in the state.

On Friday, Moore resigned after a picture emerged that appeared to show him dressed in Ku Klux Klan regalia.

Neither Moore nor DeSantis has confirmed that Moore is in fact the man in the picture. When Politico reached out to DeSantis’s office for comment, his communication director responded, 'We are in the middle of hurricane prep, I’m not aware of the photo you sent but Jeff did submit his resignation last week.'

This is not the first, shall I say, 'awkward' racial issue DeSantis had encountered. But throughout, he has had much the same response: Instead of addressing the issue directly, he — or his office — claims to be oblivious. That’s the DeSantis M.O."  (our emphasis)

DeSantis is following the Malignant Loser's play-it-dumb playbook here, as we recall when he was asked about Klansman David Duke's endorsement in 2016. More recently, there was the Malignant Loser's feigned ignorance of QAnon in 2020. They'll embrace the racists and crackpots until it's out in public, then they'll head for the tall grass and issue dishonest statements intended to push the issue off of the front pages, while waiting for the broken media to move on.