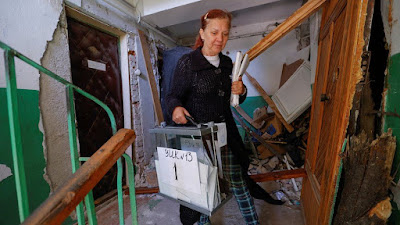 The sham referendum vote in Ukraine's Donbas region ends today, with evidence that Russian and pro-Russian soldiers are going with election workers door-to-door to force residents to fill out ballots. The ballots have a simple "yes" or "no" on whether to be annexed by Russia, and are conveniently placed in a transparent carriers so that their votes can be viewed.

Russian war criminal and thug Vladimir Putin will use the predictable outcome to claim that the population desires integration with his imperial Russia, and is threatening Ukraine with using nuclear weapons to "defend" the new Russian territory -- which Putin took by force from Ukraine.

Meanwhile, opposition within Russia is growing to the call up of men to serve as Putin's cannon fodder in Ukraine. Thousands of military age men are fleeing Russia by car and plane, and demonstrations and sabotage of recruiting stations are growing. Putin has the security police to put down the demonstrations so far, but the more widespread they become, and the more troops he needs for his war of choice, that situation may change as Russian elites see his imperial fantasies as the true threat to Russia.