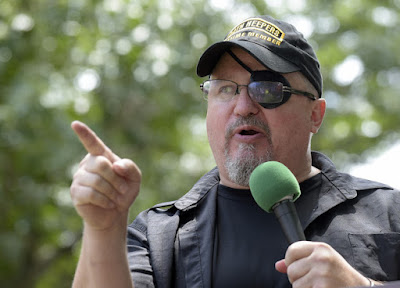 Jessica Watkins, Thomas Caldwell, and Kenneth Harrelson NOT guilty on this count.

All guilty on obstructing official proceeding on Jan 6.

All five noted in the tweet above were convicted of conspiracy to obstruct an official proceeding, but the jury acquitted the three other "Oath Keepers" of seditious conspiracy. Other charges remaining are destruction of property, civil disorder and tampering with documents.

Now, time to go up the prosecutorial "ladder" with the seditious conspiracy and other charges.

Posted by Hackwhackers at 6:30 PM

Now the sentencing has to have some teeth in it, lest the next crop of insurrectionists thinks, "Hey, only a couple months in jail for overturning the government? Piece of cake, I'm in."

bluzdude -- yes, they should get the max for planning and participating in the nation's second insurrection, after the Civil War.