Tracking Down The Insurrectionists: Hoosier Losers 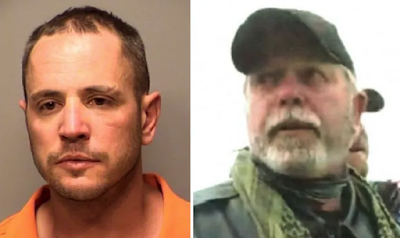 Coinciding with the conviction of several "Oath Keepers" for various felonies and misdemeanors committed on January 6, 2021, two Hoosier losers have been arrested for their part in the insurrection.  It's an uncle/ nephew pair (possibly the result of in- breeding):

An Indiana man accused of assaulting law enforcement officers with a flagpole during last year’s deadly Capitol insurrection has been arrested on felony charges, the Justice Department announced Monday.

Federal agents linked Dale Huttle, 61, of Crown Point to the Jan. 6, 2021, violence through photos and phone records, according to a newly unsealed criminal complaint. He was taken into custody on Nov. 9 but has been released ahead of pending court hearings in Washington, D.C.

His charges include assaulting, resisting or impeding officers with a dangerous weapon; interfering with law enforcement officers during a civil disorder; and related felony and misdemeanor offenses.

Huttle’s nephew, 40-year-old Matthew Huttle of Hebron, Indiana, was arrested Monday on misdemeanor charges after being accused of unlawfully entering the Capitol grounds during the 2021 attack, the Justice Department said.

Dale Huttle, reached by a CBS 2 reporter on Tuesday, said he had “no regrets” for his actions and that he will fight the charges against him.

“I did no harm. I did it with passion and conviction,” he told the Chicago-based station. “I am the ultimate patriot because I put myself on the line. I have no regrets. I will not say I’m sorry. I’m sorry I’m in this situation.”

Dale Huttle was photographed appearing to strike officers outside the Capitol with a wooden flagpole, according to the criminal complaint. He also appeared to grab an officer’s baton during the melee and at one point appeared to yell “surrender!” at the officers, authorities said, citing officers’ body camera footage...  (our emphasis)

The coward isn't sorry, but he wasn't brave enough to come forward and accept responsibility, choosing to turtle for nearly two years.  Nothing like standing up for your "convictions" only after you've been frog- marched into booking.  The justice system will take into account the senior Huttle's publicly stated confession and his lack of regret, then it will lock him up!