A Consequential Case Before The Supreme Court 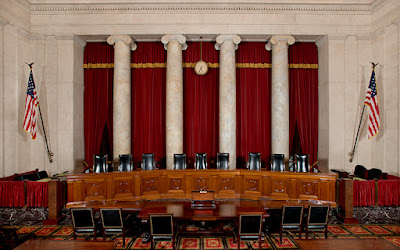 In a year where we've seen the radical right-wing Supreme Court strike down Roe v. Wade, they are about to hear arguments on Wednesday regarding a major case in North Carolina that could affect voting rights nationwide. Frustrated that the North Carolina State Supreme Court ruled against their scheme to redraw Congressional districts to give them an undeserved advantage, Republican state legislators are seeking the Supreme Court's ruling to allow state legislatures to disregard state supreme courts' orders on redistricting:

"The court is set to hear arguments Wednesday in a case from North Carolina, where Republican efforts to draw congressional districts heavily in their favor were blocked by a Democratic majority on the state Supreme Court because the GOP map violated the state constitution.

The question for the justices is whether the U.S. Constitution’s provision giving state legislatures the power to make the rules about the 'times, places and manner' of congressional elections cuts state courts out of the process."  (our emphasis)

With every Federal election, the Republican / Secession / Shooter's Party loses ground, especially among minority and voters 18-30, so rigging the electoral process is a matter of survival for them. Not surprisingly, their "legal" arguments have some support on the partisan Republican right-wing Supreme Court:

"Three conservative justices [ed.: Alito, Gorsuch and Thomas] already have voiced some support for the idea that the state court had improperly taken powers given by the Constitution when it comes to federal elections. A fourth has written approvingly about limiting the power of state courts in this area."

A ruling in favor of the North Carolina Republicans would open the flood gates to gerrymandering games (and ironically, not always in the favor of Republicans). Knowing the partisan nature of the current Court, it's not hard imagining them assisting Republican legislators in undermining state courts in order to achieve partisan advantage.