Griner Out, Whelan Remains In Russia 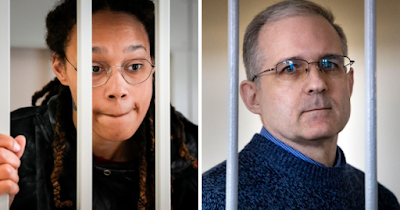 The criminal Russian Federation released WNBA basketball star and Olympic gold medalist Brittney Griner from prison today after a nine-month ordeal in Russian captivity. She was flown to the intermediary United Arab Emirates before getting on a plane to the U.S., where her condition will be evaluated at a military hospital in San Antonio before re-uniting with her wife Cherelle and her family. Griner was exchanged for murderous Russian arms merchant Viktor Bout, nicknamed the "Merchant of Death," who had been serving a 25-year prison sentence in the U.S. It's an asymmetrical swap to say the least.

The Russians are still unlawfully detaining Paul Whelan, a former Marine and security consultant, who was sentenced to 16 years in prison in 2020 on trumped up espionage charges. Whelan was detained by Russia in December 2018, and it had been hoped that he would be part of the exchange for Bout. In their statements on Griner's release, both Biden and Cherelle called for Whelan's release from prison and return to the U.S.

You can support the release of Paul Whelan at freepaulwhelan.com. As with Trevor Reed and Brittney Griner, Paul must not be forgotten as he is cruelly imprisoned by Russia.

Thank you, Hackwhackers, so much for posting the gofundme info for Paul. His family and Griner's have been so courageous. I regularly contribute to Paul because the funds go for such basic human needs. Legal help is important. But these funds also pay for his phone calls home to his parents, fresh fruits and vegetables otherwise not available, and stamps to keep in contact with the outside world. I don't know from where he draws the strength to carry on after the disappointments re the prisoner swaps. But in his letters to us he is never sullen or whiney, but just keeps, in the words of Winston Churchill "buggering on." P.E.C.