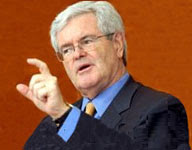 ...or what passes for thought, CPAC-style. Newtie Gingrich, wingnut intellectual emeritus and mini-government proponent, demonstrated his non-compassionate conservative thinkin' at the recent CPAC gaffe-fest, pontificatin' about the Katrina catastrophe thusly: "How can you have the mess we have in New Orleans and not have had deep investigations of the federal government, the state government, the city government, and the failure of citizenship in the Ninth Ward, where 22,000 people were so uneducated and so unprepared, they literally couldn't get out of the way of a hurricane."

Newtie-boy. Let's focus on the uneducated and unprepared folks at FEMA and in the Oval Office who to this day, a year-and-a-half after Katrina, still don't have the faintest, foggiest notion how to help - or at least get out of the way - in the rebuilding and revitalizing of New Orleans. That's the real outrage, and where a "deep investigation" should focus.
Posted by W. Hackwhacker at 11:34 AM