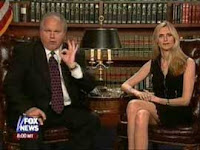 Amazingly enough, the Rupert Murdoch/Fux attempt at wingnut humor, otherwise known as the "1/2 Hour News Hour," is still on the air. Talk about subsidies! That abomination must be losing Rupert millions, but it's only pocket change when you're trying to prove -- in a spectacularly unsuccessful manner -- that wingnuts have a sense of humor. Happening to come across it last night as one would an infected zit, I watched long enough to see most of one "skit" involving atheist authors being interviewed. Knowing this was Fux, the "gag" could be spotted coming from waaaay over yonder: after each atheist author blasphemed, he/she suddenly was struck dead. Heh heh. Yeah, that's wingnut humor alright! A laugh-track provided the laughter, of course.

What this perfectly demonstrates is what James Waller, in his book "Becoming Evil," categorizes as one of the traits common to the authoritarian personality -- authoritarian aggression. This is defined as the tendency to be on the lookout for, and to condemn, reject, and punish people who violate conventional values. (The show clearly is a rip-off of the 1930's German radio laugh-fest "Zappen Der Juden Mit Der Lightning Bolt" - on the Fuchs Network, of course.)