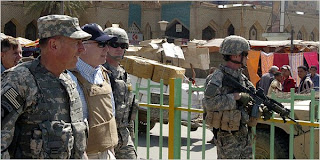 Senator McSame and his coat carriers, Sens. Lieberliar and Grahamcracker, slipped into Baghdad for an unannounced "tour." Needless to say, they will be reporting on the marvelous conditions they are encountering, and how wise they were to support a surge in U.S. forces last year. One inconvenient problem has cropped up, though: the Shorja market which they visited last year accompanied by 100 troops and helicopter gunships is now off-limits to them. It's controlled by the radical Mahdi Army.

There are also reports that President, er, Vice President "Dead Eye Dick" Cheney also snuck into Baghdad at night, unannounced, to work on the main point of the surge - - Iraqi political reconciliation. Yes, Cheney, the master of political reconciliation and compromise. Maybe he can fire off a "go f*ck yourself" or two to the Iraqis, as he did at Senator Leahy on the floor of the Senate. That'll work.

Maybe next time, these guys can get Ahmadinejad to escort them around. They might even get a parade out of it.

(photo: McSame going on a casual stroll for an ice cream cone in his Sunday best)
Posted by Hackwhackers at 8:30 AM