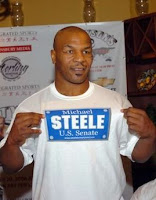 Former Maryland Lt. Gov. Michael "Tin Man" Steele was elected by the Rethuglican National Committee to be its butler, er that is, chairman. Tin Man, one of 17 African American Rethugs, will undoubtedly attempt to sell Rethuglicanism to minorities, while proposing policies that would do them great harm. He was recently quoted as saying, "this notion that I'm a moderate is slightly overblown, and quite frankly a lie."

Tin Man also happens to be the ex-brother-in-law of Mike Tyson (pictured), who was seen biting the ears of several RNC members before the vote.
Posted by Hackwhackers at 4:12 PM

Overheard at the RNC meeting:

"Mmmm, them ears was tasty. We got a new way to get out the vote," the ex-champ said.