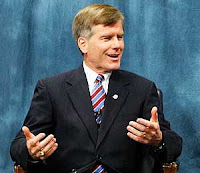 The lead of Rethug candidate for Virginia Governor Bob "Stealth" McDonnell has dropped in recent polling by half (down to 7 percent over Democrat Creigh Deeds). One reason to hope this "New Nixon"-type candidate will continue to plummet is a master's/law thesis he wrote 20 years ago, when he was a mere lad of...34. Seems the thesis, which McDonnell brought up himself to reporters, is full-bore American Taliban. (McDonnell, a long-time social right-winger who attended Pat Robertson's Regent "University", has been trying to tack to the center in the hopes of convincing enough inattentive voters that he's no threat to them.)

As Ruth Marcus points out, the "93-page, 176-footnote 'macaca' moment" presents all the ugly Christian right ideology made famous by Robertson and Jerry Falwell: anti-woman, anti-gay, anti-working poor. The thesis itself is a plan which McDonnell lays out for Republicans to use government to "strengthen the family." Hopefully, the Democrats will take this and run with it, ironically (as Marcus points out) using social wedge issues against a person and party that have long done the same. Turnabout is fair play, and all.