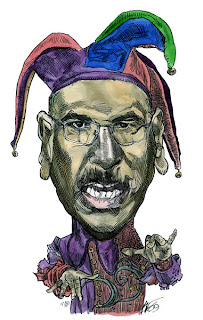 Having followed Rethug National Committee chair Michael "Tin Man" Steele's political career for a few years, we're not surprised at his soulless, cynical opportunism -- after all, when running for the Senate in Maryland in 2006, he deceitfully tried to palm himself off as a Democrat to gullible voters. When Tin Man appeared at mostly black Howard University, he had to bus in a couple of dozen young white Rethugs to clap when he waved his arms during his "dialogue" on health care. When a young student told her story of her mother's losing battle with cancer, Tin Man mocked her and suggested she just wanted to appear on TV.

Of course, Tin Man's routine consists of telling audiences that everyone should have health care, but strangely never gets around to telling people what the Rethugs' proposals are that would curb costs and cover everyone. That's because the health insurance giants, in whose pockets Tin Man resides, don't want anything approaching reform, and will pay Tin Man's party handsomely to keep it that way.
Posted by Hackwhackers at 3:37 PM