Mom of the Year? Probably Not 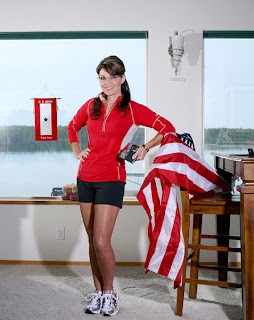 Levi Johnston, ex-fiance of Winky You Betcha's daughter Bristol, is giving everyone some interesting views into life in Winkyville. Johnston, in an article in the current Vanity Fair, says that Winky and husband Todd the Secessionist bicker often and sleep in separate bedrooms; that Winky has the kids do all the housework and sends them out for her food (Taco Bell seems to be a favorite); that Winky never reads a newspaper; and that -- horrors for Winky's fanbase! -- Winky doesn't know how to shoot. Hard to believe, but Johnston also says Winky has referred to her Downs syndrome son as "the retarded one." Mom of the Year.

(photo: Winky respecting the flag, and ready to run away from her responsibilities)
Posted by Hackwhackers at 1:34 PM