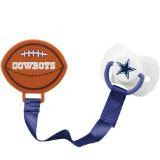 Maybe we're not wildly enthusiastic about any of the teams left in the NFC playoffs, but it sure was nice to see the Dallas Cowpies get smashed hard by the Vikings by the score of 34 to 3 (bwahahaha!). While some may argue that the Vikings' superfluous touchdown in the final 2 minutes was "rubbing it in," we say "call the waaaah-bulance." It's the offense's job to score points and it's the defense's job to keep them from scoring, something the Cowpies failed miserably to do on both sides of the ball.

(image: Pacifiers were distributed in the Cowpies' locker room after their defeat)
Posted by Hackwhackers at 9:23 AM