No Orly Arguments Will Be Heard 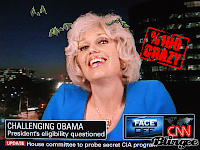 The Supreme Court has upheld the ruling by a lower Federal court that birther diva Orly "Taint" Taitz must pay $20,000 in costs for filing "frivolous" lawsuits aimed at denying President Obama's citizenship. The nutty Taint has been on her mission ever since the President was sworn in, trying to spread her delusion that Obama is a secret commie "Mooslim" Kenyan (notwithstanding his Hawaii Certificate of Live Birth, and the August 1961 birth announcement in the Honolulu daily newspaper -- d'oh!). Clearly, a time machine was used.

Apparently, Taint remains defiant, and vows to fight on (snicker snicker). We think her tinfoil hat needs to be adjusted.
Posted by Hackwhackers at 2:29 PM