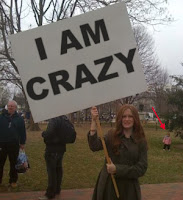 E.J. Dionne has a great op-ed article today in the WaPo / Kaplan Daily on the "fast one" being pulled by the Tea Farty on the public and mainstream media. He cites the total number of wingnuts who have voted in the Rethug primaries in Alaska and Delaware for teatards (86,441), as well as polls showing that around 6% of voters had attended a teabagger rally or meeting. Contrast those numbers with the out-of-proportion coverage in the media and influence on Rethug politics. Even more ominous is the all but unmentioned backing the "grass roots populist" teabaggers are receiving from billionaires like the Koch brothers, who are happy to have these wingers do their lobbying for them, from the lobbying firm FreedomWorks (Dick "Major Dick" Armey's group), and from the Fux Network.

As Dionne concludes, it's about time for progressives and the media to call them out on their "scam."