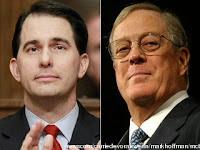 Anyone following Wisconsin politics knows that Gov. Scott "Too Much Johnnie" Walker (Trog-WI) is beholden to the extreme right-wing Koch Brothers for his political success. The Koch (they pronounce it "coke" but we think "cock" is more a propos) Brothers are well-known as big time funders of the tea party movement, climate change deniers, and anyone else with a reactionary agenda.

Enter the on-line newspaper "Buffalo Beast," and more specifically editor Ian Murphy. Murphy, being the enterprising journalist he is, had been trying to contact Gov. Union Buster but had been unable to get past his Praetorian Guard. So, he figured the person most likely to get a phone chat with Gov. Dip Stick would be his patron, David Koch. Blimey if the Guvner didn't take the call and, well... HuffPo has the tapes and transcripts, go over and have a chuckle (or weep a little, as the case may be)!

(Photo: "Bartender: a little "Too Much Johnnie" Walker and Koch, please!")
Posted by W. Hackwhacker at 3:55 PM